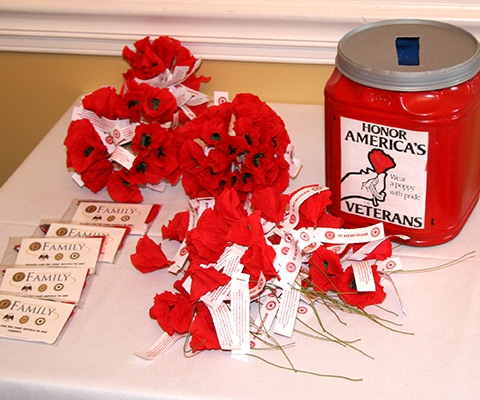 After World War I, the poppy flourished in Europe. Scientists attributed the growth to soils in France and Belgium becoming enriched with lime from the rubble left by the war. From the dirt and mud grew a beautiful red poppy. The red poppy came to symbolize the blood shed during battle following the publication of the wartime poem “In Flanders Fields.” The poem was written by Lieutenant Colonel John McCrae, M.D. while serving on the front lines.

The month of May is the American Legion [Family] Poppy Campaign. National Poppy Day is May 24, 2019.

Locally, this is how we participate:
May 1-3 we distribute poppy baskets to local merchants for donations to hold for the month.

May 16-18 we distribute poppies to individuals on street corners and merchant locations.

May 25, we march in the Bad Axe Memorial Day parade.

May 27 Memorial Day we have a memorial service at Rock Falls Cemetery, followed by the Harbor Beach Memorial Day parade, culminating in a service in town at the Veterans Memorial..